In New Zealand, it’s not uncommon to find businesses operating with extremely tight cash flows and limited access to capital. This puts increased pressure on containing fixed costs so business owners can manage unpredictable revenue streams. While VoIP-based tech has done a great job of shrinking operating costs for communications, only a flexible mobile VoIP component can generate the kind of revenue that businesses require. Although calling has become something of a lost art, employees around the world – especially millennials – are discovering it again using a virtual PBX phone system deployed across mobile networks.

While the heated debate over whether or not cold calling is dead continues to rage on, the fact is that 92 percent of customer interactions happen on the phone, according to research by Salesforce. Not just any phone, though. A a survey by Natterbox revealed that more than half of employees prefer to make calls using their mobile phones instead of desk phones.

Why has it been so hard to pick up the phone, especially for millennial workers? Here are a few reasons that we've heard directly from business owners:

The return of the 2 minute phone call

Your customers want to talk -- and millennial employees already carry almost everything they need to make it happen.

Freedom of movement has driven the unprecedented speed of smartphone adoption by millennials and they also bring new appreciation for simpler communications to the business world. Deloitte’s 2017 global mobile consumer survey reported that phone calls by millennials were up by 9% over 2016, reversing a four-year downward trend. Better voice quality and powerful mobile features are behind this trend, along with the fact that millennials have experienced how a brief phone call can be simply far more effective for some kinds of communications.

Spoke Phone is a 100% mobile business phone solution for the on-demand, on-the-road workforce. They don't want to be tied down to their desks but still need the efficiency of an enterprise-level communications system. Spoke is there for the next generation of business owners and employee, who love the simplicity of voice but want the efficiency of doing everything from their own phones

To learn more about Spoke, including how our AI, machine learning and data analytics are driving a smarter mobile global solution, sign up for an interactive demo and learn how to transform your business phone line into a smart office phone system that everyone will love to use. 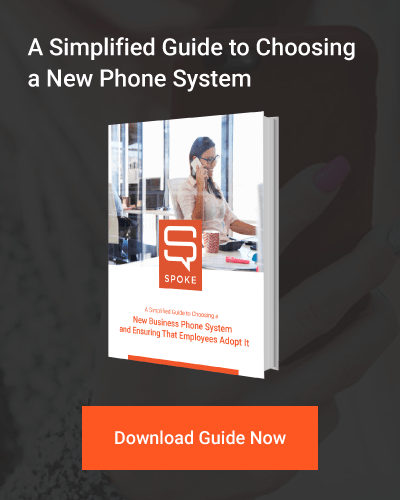