Think about how many times you’ve been deep in the middle of an email or chat thread and thought, “If you would just pick up the phone, we would solve this in 2 minutes!”  Here are seven times that saved the day.

Humans have been working out problems voice-to-voice for around 60,000 years, give or take a few aeons. In comparison, writing has only had about 5,000 years to work things out and email has had a few decades.

As for chat apps… It doesn’t really count as chatting if you’re not talking. You have to go with experience here.

Science doesn’t work on hearsay, though. We'd like to present you with the evidence in the form of hard experimental data, admittedly with a rather humble sample size. The point is that your entire world can change in the course of a 2 minute phone call. If you learn how to deploy it intelligently, the brief phone call can be an invaluable resource for business and your life.

The Book of 7 Rings

1. Open call – A two-minute phone call from golf pro Dustin Johnson may have been the most important call ever for Brooks Koepka, who came from behind to win the 2017 US Open, smashing all kinds of records along the way. Johnson’s advice: “Stay patient, just keep doing what you’re doing, you’re going to win the thing. Just don’t get ahead of yourself.” We could all use a pep talk like that.

2. Monte Carlo stimulation – A similar encouraging exchange brought race car driver Jenson Button out of retirement to put the band back together and get behind the wheel one more time at the 2017 Monaco Grand Prix. Eric Boullier, the team’s racing director, tried texting Button to get him back, but it just wasn’t persuasive enough. A hefty fee helped, as well.

3. 137 lives – The Journal of Emergency Medicine reported that for every 100K people sick or injured, 137 lives are saved by calls from mobile phones. Mobile phones are there on the scene, often far from landlines, giving rescuers the extra life-saving seconds they need.

4. Bank and trust – It’s a simple story, but it’s nowhere nearly as common as it should be. A brief call from a personal banker saved a customer. It wasn’t the caller’s sales skills that saved the business. It was here relationship management training. A study by IBM found that bank customer advocates are 5X more responsive to offers and 17X more likely to trust their business partner. These findings have applications far beyond the world of finance.

5. The original hotline – Mark your calendar for Aug. 30, 2018. That will be the 55th anniversary of the world’s first hotline. After the Cuban Missile Crisis brought the world to the brink of thermonuclear war in 1962, the leaders of Russia and the US decided they needed a way to just talk it out when things got hot. The line went online 24/7, instantly connectling world leaders decades before the first customer service website.

6. Silence might be golden, but it’s definitely worth $22K/minute – Negotiation is usually won by what isn’t said. In fact, not saying anything at all can be extremely powerful in a voice-to-voice exchange. Steli Efti, CEO of Close.io, found that staying silent on a call made the other party nervous, eventually saving him $225,000 in renegotiating a contract.

7. Your story -- Think of all times when a phone call changed everything for you, from solving a thorny problem at work to pointing the entire business in a new direction. We'd love to hear your stories about about when a phone call hit reset on your world.

Before you hang up

The short version is that phone calls save money, save businesses, save careers and save lives.

While common wisdom suggests that millennials hate phone calls, that’s not entirely true. What they actually hate are bad phone calls. Spoke helps you make better calls with built-in tools like AI-based caller presence detection, pre-call context and better sound quality. Our goal is to make it easier for small business owners to just talk it out  with their team and get more productive.

Try out Spoke by downloading a free trial of the app and start making the world a smarter, more connected place to be. 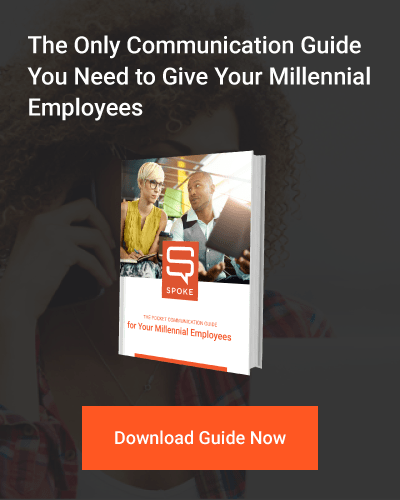